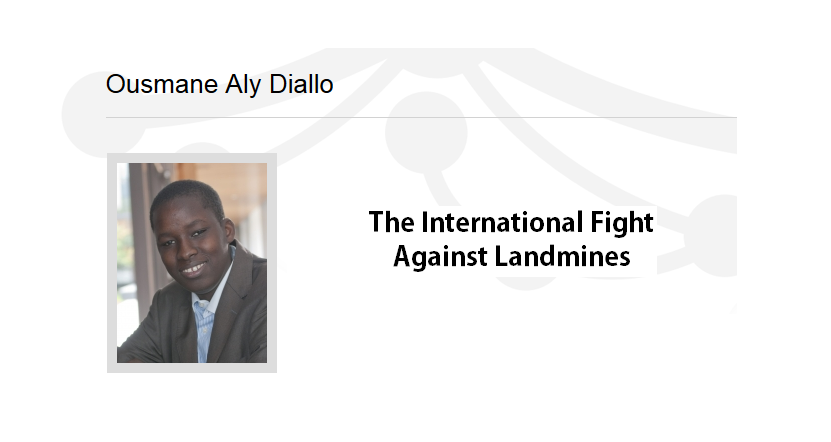 The following text is a speech delivered by Ousmane Aly Diallo, a Ph.D. Candidate and a Doctoral Fellow at the Balsillie School of International Affairs, on the continuing danger posed internationally around the world by landmines and unexplored remnants of war.

Ousmane’s research interests include the role of identity and legitimacy in the ownership of international interventions by national actors in West Africa, with an emphasis on the collaboration between the UN and regional organizations such as ECOWAS and the G5 Sahel.

He has previously worked as a Protection Assistant on statelessness issues in West Africa, with the UNHCR regional representation in West Africa, and as a junior research fellow at the Institute of Security Studies’ Dakar and Nairobi offices. He’s a member of “L’Afrique des Idées” and is also involved in the development of a new citizen-driven and participative think tank, WATHI, which aims to engage political decision-makers and citizens, on the structural challenges impeding the well-being of West Africa’s citizens.

Ousmane received his M.Sc. in Political Science from the Université de Montréal and his Master’s thesis focused on the role of identity in China’s Africa Policy.

Please bear with my accent, which is stranded somewhere between France and Senegal. It’s atrocious but I have managed to converse with friends and colleagues, here in Waterloo. I just hope it will not fail me during this speech.

As the ICBL enters into its 24th anniversary this year tremendous progress has been made in banning landmine and cluster munitions, but much more work still needs to be done in order to give a chance to millions of people around the world to develop their potential and live a life free of the impact of landmines.

The International Campaign to Ban Landmine has been one of the most effective and sustained effort to improve peace and human security in conflict-affected regions in the world. It is a living evidence of what can be achieved when people from all over the world care and act.

Through this campaign, driven by people resolutely committed to freeing the world from weapons that continue to kill and maim way after the end of the hostilities, an increased awareness has been created and world leaders have been confronted to commit and take actions.

For most people landmines are associated with major ongoing armed conflicts, whether they occur in Syria or Yemen. But the truth is that in many cases, landmines have as much impact in the lives of civilian populations in many “forgotten conflicts”. A peace agreement seldom reduces the threats posed by landmines.

I will illustrate my point by talking about the impact of landmines in a specific context, that of a low-level rebellion that has been going on in Southern Senegal for the last 30 years. The conflict in Casamance is happening in the most fertile region of the country, locked between The Gambia and Guinea-Bissau. It began in 1982 following the brutal repression of demonstrations spearheaded by an independentist movement. And there has been no peace since. The conflict is little-known outside of the country, but it is the oldest ongoing conflict in West Africa.

Last year, around this period, I was part of a research team to assess the security situation in the Casamance region of Southern Senegal. We were asked to identify areas where the organisation which commissioned the mission could work on improving human security and livelihoods. One of the main finding of this project was that although military confrontation between the government and rebel insurgents seldom happens, landmines constituted the most acute security risk for the population of Casamance. Besides, it had a strong impact on the economic output of the region and by extension, of Senegal, because many farmers dare not invest in agriculture

Indeed, most of the heavy fighting between the government and the Mouvement des Forces Démocratiques de la Casamance (Movement of the Democratic Forces of Casamance) occurred in the 1980s and 1990s. Various peace processes have been initiated since 1991, but insecurity still prevails in this little strip of fertile land. The most contaminated areas are along the border between Senegal and The Gambia, and Senegal and Guinea-Bissau, where rebel groups are encamped, deep into the forest.

Much progress has been made in raising awareness about the devastating impact of landmines on communities but there’s room for progress. Indeed, more pressure should be exerted on those countries that did not accede to the Ottawa Treaty to do so, and to those that have ratified it, to respect their international commitments.

Senegal was one of the first countries to accede and ratify the Ottawa Treaty in 1998 which, as we know, bans the use, production and stockpiling of antipersonnel mines – and pledges support to mine-affected victims.

Mines were laid by the government and rebel forces prior to 1999 certainly. But the government could do much more to favour humanitarian mine clearance in contaminated areas. Indeed, it is even hard to assess the extent of minefields in that region, due to the level of secrecy surrounding that issue.

According to the head of demining operations of Handicap International in Senegal, “Mines are laid in a totally random fashion in Casamance. There are mines in the woods, orchards, fields, around wells, and roads. Mines are simply everywhere.”  Populations are exposed at any time. And too often, a simple step could mean maiming, or a slow death for the people of Casamance.

The health care coverage of people affected by landmines in Casamance depends a lot on donor support, which is not constant over the years.  Right now, the government has not developed a comprehensive policy to take care of landmine victims, and there’s no plan to address that issue. Victims are therefore abandoned to their fates, and without the support of their families or communities, their lives become very precarious due the lack of socioeconomic opportunities and sometimes, the stigma associated with amputations.

Besides these issues on the care of landmines victims, the lack of political will for mine clearance is another obstacle in the campaign to eradicate these deadly weapons in Senegal. When International actors have stepped in to favour humanitarian mine clearance, none of the political parties have done their best to assist them. In 2013, the Norwegian People’s Aid started a mapping project of minefields in Casamance, as a prerequisite for its mine clearance efforts in that region. With the support of other international actors such as the UNDP, it was able to clear a 200,000 square-meter area out of a 1.300.000 square meter suspected zone, along the border between Senegal and Guinea-Bissau. But after a year, the Norwegian People’s Aid stopped its activities in the region, citing frustration with the Senegalese government’s lack of cooperation; which had a negative impact on the efficiency and transparency of its projects in the Casamance region. Indeed, as long as a viable peace agreement has not been signed with the rebel movement, clearing minefields will not be a government priority.

This unofficial stance is a direct violation of Senegal’s commitments to the Mine Ban Treaty which considers humanitarian mine clearing as considered one of the key priority areas.

Another example of the difficulty of humanitarian mine clearing in that region, in 2013, 12 employees of the South African demining company MECHEM were abducted by a faction of MFDC, during the course of their work. The MFDC faction considered that a red line was trespassed by MECHEM, which was operating too close to their bases.

Although they were freed months later, the uncertainty of humanitarian mine clearing and the frustrations encountered by many development partners and private companies during these operations constitute a serious setback for Senegal, which aimed to clear all minefields in that region, by  1 March 2016, next Tuesday.

Politics and lack of transparency are one of the key obstacles to the improvement of the security of populations in the Casamance region. According to the Norwegian People’s Aid, 6 months would have been enough to clear the region of all its landmines, if there were genuine willingness from government officials to do so.

For too long, these international commitments have been conditional to the progress in the peace process in Senegal. And there’s no guarantee that no new mines are being laid while progress is stalled in the humanitarian mine clearing operations.

The conflict in Casamance clearly shows that when even armed confrontations are a rare occurrence in conflict zones, landmines continue to be a source of insecurity but also a socioeconomic obstacle. Indeed, the secrecy surrounding minefields in Casamance and their presence next to arable lands, has had a negative impact on the economic output of a region that was often described as “Senegal’s breadbasket”. In a population that is heavily dependent on agriculture to sustain its livelihoods, farmers cannot take the risk to till their lands and grow crops, due to the chance of stepping on minefields, of having limbs amputated without any serious possibility of care after.

The residual risks posed by minefields have therefore had a negative impact on the economic dynamism of the Casamance region. People die due to landmines doing the most natural activities: it could be going to the fields, going back home after school, or most tragically, children stepping on landmines while at play.

This shouldn’t happen. And I am glad that here in Kitchener, the Roots and Shoots Club and the Canadian Landmine Association are raising awareness on this security issue, which has a long-lasting impact on the sustainability of many communities.

I believe that the new gust of optimism that followed the election of Mr. Trudeau during the election could bode for a stronger role for Canada on this issue, given its past leadership on questions surrounding landmines, cluster munitions and SALW.

The world has become a much less safe place nowadays, and every year, landmines continue to cause the death of  15,000 to 20,000 people — most of them children, women and the elderly — and severely maim countless more.

Although the task ahead is hard, I have hope in the global campaign against landmines given the progress made in the last 25 years. We must work harder to raise awareness and to put our governments in front of their responsibilities. And it starts at the community level, in events such as this one, as we interact with colleagues, friends and family.

I will conclude this speech by quoting the former UNSG Kofi Annan, who said that “Landmines are among the most barbaric weapons of war, because they continue to kill and maim innocent people long after the war itself has ended. Also, fear of them keeps people off the land, and thus prevents them from growing food”. I believe it sums well the insecurity caused by landmines in Southern Senegal and in many other conflict zones in the world.

But I have much hope that these residual risks can be dealt with.  As long as we care, there’s chance to free the world of these silent killers.

Thank you once again for your attention.