A Message to Rotarians from Wilf Wilkinson 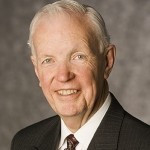 When was the last time you stepped on a landmine? Probably never – aren’t we fortunate. If you live in Cambodia, Iraq or Syria, to name a few, you may have not been so lucky.

Rotarians have committed time and money to eliminate many ills that plague our world, including longstanding support of mine action. We at the Canadian Landmine Foundation (CLMF) are asking Rotarians to renew their commitment to eliminating these terrible weapons.

Rotarians and Rotary Clubs have been some of the largest financial contributors to the Canadian Landmine Foundation. 122 Clubs in 18 Districts coast to coast have contributed more than $260,000 to Canadian Landmine Foundation programmes over the years. These funds went to projects that cleared mines and assisted survivors in places like Bosnia, Mozambique, Afghanistan and Cambodia. 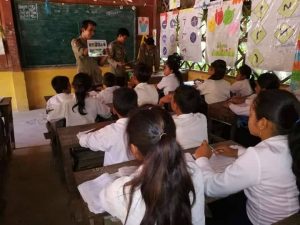 CSHD personnel teach a mine risk education class at a village school.

Today the Canadian Landmine Foundation works to raise awareness at home and support mine action in Cambodia through partnerships with local organizations. Cambodian Self Help Demining (CSHD) operates demining and explosive ordnance disposal teams in rural Cambodia. When villagers find mines and other explosive remnants of war, one of five Explosive Ordnance Disposal (EOD) teams are dispatched to neutralize the explosives and conduct mine risk education. The Canadian Landmine Foundation is proud to sponsor one of those EOD Teams.

To date, CSHD teams have cleared 3 million square metres of land. CSHD was founded in 2008 by an ex-child soldier named Aki Ra – who has personally cleared more than 50,000 landmines – with support from former Rotarian Bill Morse (Palm Springs).

It is now time for Rotarians to revisit their commitment to this worthwhile humanitarian cause. In keeping with this year’s Rotary theme, it is time once again for Rotarians “To Make a Difference.”

On behalf of the Foundation’s Rotary engagement committee, I thank you for taking time to consider supporting the Canadian Landmine Foundation. I believe it typifies the work of Canadian Rotarians during the 150 anniversary of our country.