Rotary and the Canadian Landmine Foundation

Rotarians and clubs have been involved with the eradication of Landmines since the passing of The Ottawa Treaty in 1997. The effort to establish an international treaty banning the use, sale and manufacture of landmines was led by then Canadian Minister of Foreign Affairs Lloyd Axworthy. He was nominated for the Nobel Peace Prize for his efforts and still serves as the Canadian Landmine Foundation’s Honourary Chair.

In 1999 the Canadian Landmine Foundation was formed with backing from the federal government’s $100 million Canadian Landmine Fund. Its task was to involve Canadians in mine action by raising awareness and funds for demining and victim assistance. Today the Foundation works to raise awareness at home and support mine action in Cambodia through partnerships with local organizations.

Rotarians have served on the Foundation’s Board of Directors since its creation.

Dr. John Frid, a Rotarian from Hamilton (Hamilton) was on the Foundation’s inaugural Board of Directors. Rotarians Herb Epp (Kitchener), and Chris Snyder (Toronto)—have served as the organization’s Chair, and Scott Fairweather (Toronto Forest Hill) was the Foundation’s President and CEO from 2003-2009. Past District Governors Rosemary Barker-Aaragon (5030) and Richard Clarke (7070) have been on the board as well as past Rotary International President Wilf Wilkinson (Trenton).

With the support of Sandy Boucher (Toronto) and Richard Clarke (Parkdale-High Park), Rotarians for Mine Action became one of the inaugural Rotary Action Groups in 2005. The new RAG presented on the big stage at the Rotary International Convention in Chicago that year, followed by several breakout sessions.

Rotarians for Mine Action worked to increase Rotarians and Rotaractors awareness and knowledge of landmine issues. It also encouraged involvement in projects to:

Rotarians and Rotary Clubs have been two the largest financial contributors to the Canadian Landmine Foundation. 122 Clubs in 18 Districts coast to coast have contributed more than $260,000 to Canadian Landmine Foundation programmes over the years. These funds went to projects that cleared mines and assisted survivors in places like Bosnia, Mozambique, Afghanistan and Cambodia. At the height of the Night of 1000 Dinners campaign, over 90% of all Rotary Districts in Canada were holding N1KD events! 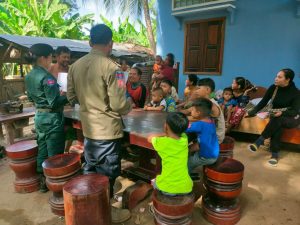 The Foundation’s current project is in support of Cambodian Self Help Demining.

From the 1960s to the 1990s, Cambodia was in an almost constant state of war. Saturation bombing, civil war, and genocide scarred its landscapes and its people. Today, 640 square kilometres of Cambodia is contaminated with land­mines or other explosive remnants of war that continue to kill and injure people and deny farmers and families thousands of hectares of land. Since 1979, more than 65,000 Cambodians have fallen victim to one of these explosive devices.

People who find these explosives need to know how to respond. They also need the devices removed quickly and safely so they can get on with their lives. Cambodian Self Help Demining (CSHD) operates explosive ordnance risk education (EORE) and explosive ordnance disposal (EOD) teams in rural Cambodia. When villagers find mines and other explosive remnants of war, an EOD team is dispatched to neutralize the explosives. Another team is dedicated to educating people where to exercise caution, how to recognize explosive devices, and what to do if they find one. The Canadian Landmine Foundation is proud to sponsor Explosive Ordnance Risk Education Team 6.

With your help Rotary can continue to play a major role by donating money from your International Service Committee budget or Sponsoring a Night of 1000 Dinners event.